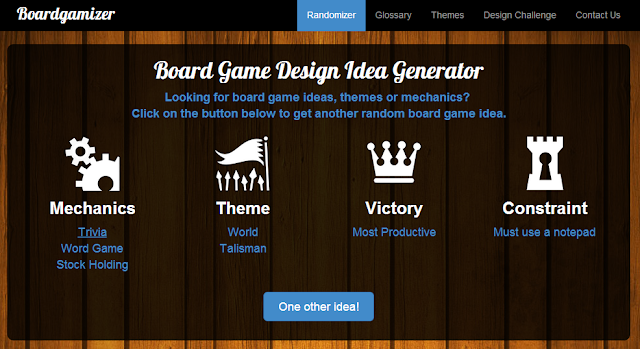 This one seems like such a huge step up from the games I've been doing lately that at first I'm not even sure how to approach it.

It is the first game I've had with more than one mechanic, and it jumped all the way up to three mechanics immediately.  It's also got a couple of themes that seem a little difficult to work in together with the mechanics and the victory conditions.

On the other hand, one thought about constraints and so many conditions is that they almost allow the games to write themselves.  I'm not sure that's what is happening here, but maybe looking back from the end of this post I'll see it that way.

When I approach most of these games, I look at mechanics and victory conditions as something of a set.  They need to work together in the end, so I think it is easier to just start by pairing them.  Theme is a little more flexible to think about.  One exception might be victory conditions that involve points.  The difference between a game using points, victory points, experience points, etc is pretty small.  So I don't worry too much about those conditions as long as there is some element mechanically that allows for some kind of recorded and rewarded accomplishment.

In the case of this game, I've got essentially 5 things to work with mechanically: trivia, word games, stock holding, notepad use and then productivity.  I've mostly been making very simple games on this site (one virtue of only having a day to think about them).  This game might be a bit more complex as a matter of necessity.

Theme:
Each player is the principal mage in a trading company based on building knowledge and mastery over resources around the world.  Players win the game by wisely investing in the best trading companies they can, and by enriching the regions where those trading companies operate.  Each player has been awarded a charter by the guild of magical trade allowing them to operate in all but one region of the board (different for every player), so they must pick and choose the regions they will concentrate on to advance their own interests.  Ultimately their mandate is to make as much money as possible though, so their strategy must balance decisive action with wise investment (perhaps recognizing that another player may increase the value of another region more quickly, for example, and investing in that region instead of the one they are working in).


Mechanics:
Every player turn has phases:

- Movement phase.  Players may use their magical talisman to teleport to any region of the map they can correctly name.  The map is unlabeled, but the Regional Charter for that region does include the names of all the cities.  So the player declares that they will cast the spell of movement, then they write the name in their notebook.  They then declare the name of the city while they point to it on the map.  The holder of that region's charter either confirms or denies that the city name is correctly spelled and named.  If the name is correct, the mage moves to the new location immediately, and they add the name to their letter collection.


Cheating a bit tonight.  Keyboard isn't working and I've only got my ipad on the road. Will finish his up tomorrow with the next post.  Ciao.
Posted by crashdavis9 at 10:10 PM