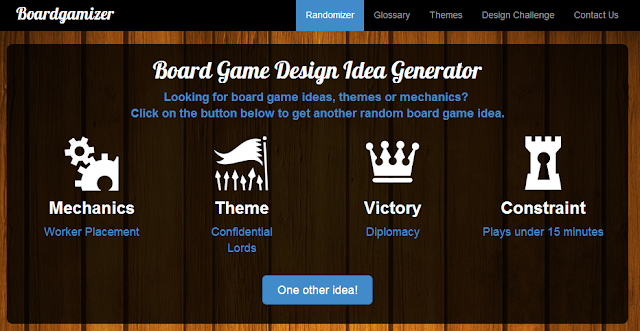 This one is mind blowing to me, but that could be down to the fact that I just played Phase 10 for a couple of hours and drank about half a liter of beer.  Phase 10 is not one of my favorite games, by the way, but it does the job sufficiently well when you just want some casual gaming while talking about upcoming vacation plans.

But there's an immediate conflict with the constraint of a 15 minute game.  The worker placement games I've played are more labored affairs, with the shortest ones clocking in at around an hour.  So cutting it down to 15 minutes will be tough.

Also, there is a small conflict with confidential and diplomacy, though there are definitely games that do some level of confidentiality and diplomacy (like Diplomacy itself, even).  But especially in a short game it makes it seem difficult to come to a definitive diplomatic solution.

The final element is Lords.  OK, that's easy enough.  It makes part of my setting for me and that's one of the things I'll work with to make this happen.

Each player is a border lord on the edge of a great empire.  They are all trying to impress the Emperor by making alliances with their barbarian neighbors.  Whoever manages to lock in the most alliances after three rounds wins the game.

Player boards have 11 total spaces, and the screens conceal their boards from all other players.

There is a space on each player board for each tribe and each resource.  The screen can be flipped up to reveal all the resource areas.  The tribe areas on the player board have a hidden resevoir/cup to hold resource cubes and keep them hidden at all times from other players.  This is known as the tribute box.

Each player gets five meeples.

The first player rolls one die for the Elk tribe.  The number corresponds to a resource.  If they roll a 1, it is wheat, 2 is gold, and so on.  They place one cube of that resource in the tribe's resource area.  Players proceed clockwise to roll for the next tribe, until all the tribes are allocated one resource.

Over the course of the game, each tribe values this resource most highly.  It is double the value to that tribe of any other resource.

Over the course of the game, players try to earn resources and covertly pay off the tribes to gain their favor.  The player who has provided the most value to a tribe at the end of the game will win the alliance of that tribe (in the case of a tie, the tribe will ally with the player who provided the most of their favored resource, if it is still tied, the tribe allies with no one).

Round 1-3:
Each round, players continues around in their clockwise order.  Each player rolls 2d6 for a resource (in order 1-6) and then places that number of resource cubes on the resource mat.

Players are given 1 minute to place their meeples behind their screen onto the resource areas they most want to gather.  They may place meeples in any combination they want.  Five meeples on one resource is valid, as is spreading their meeples over five different resources.

Each player that has placed a meeple for a particular resource earns a stake in that resource for the round, divided by the number of meeples that have been placed in that resource type.  Remainders after division remain on the resource mat for next round (they go to waste in round 3).

After all the resources are collected, each player has one minute to secretly place the cubes into their tribute boxes.

After round three, each player must reveal how much tribute he paid to each tribe.  Elk tribe is first, and each player reveals how much tribute they paid to Elk, based on the value to the Elk tribe (their primary resource worth 2 points each cube, all other resources being worth 1 point).  The player with the most points wins their alliance, with tiebreaks explained as above.

The player with the most alliances at the end of the three rounds is declared the winner.