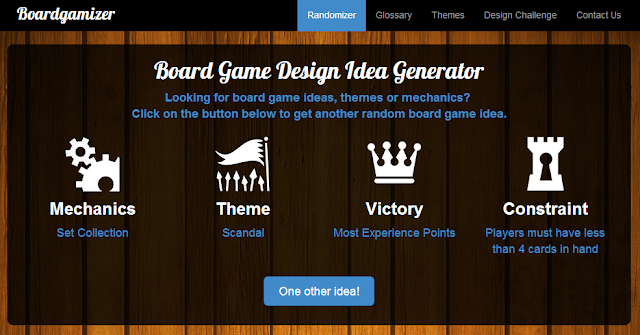 Mechanics: Set Collection
Theme:Scandal
Victory: Most Experience Points
Constraint: Players must have less than 4 cards in their hand

Parts:
- 52 card deck of muckraker cards.  Each card represents a notable story.  There are 13 card sets of each story in the deck, and a total of 4 topics.  Each story also has an experience point value from 1 to 13.  Muckraker can be played with a standard 52-card deck.
- Rule book

Theme:
Each player represents a tabloid political newspaper.  Your mandate is to publish stories on the scandals of the day without getting wrapped up in stories that might get you in trouble with the censors in the government.  The public's mood changes all the time though, and they will follow the newest scandals and disregard the old before you can say "yesterday's news."

How to Play Muckraker:

- The shuffled cards become the draw pile, and they should be placed face down  in the middle of the table.

- Draw one card off the top and place it face up to the east of the draw pile.  This is the Hot Topic.

- Draw another card off the top of the deck and place it face up to the west of the draw pile.  This is Old News.

- Player one draws four cards from the draw pile.  They can play any two cards from their hand face down onto the table, and then pass their two unwanted cards to the next player counter clockwise.  That player draws 2 cards, and plays whatever combination of two cards they want onto the table and again passes two cards to the next player.  Play continues around the table until every player has two cards played face down onto the table in front of them.  The last player places their unwanted cards in a discard pile to the south of the draw pile.  (See the section on scoring below)

- Each round, the starting player rotates one space counter-clockwise.

- Player reveal and score their cards starting with the first player who played in the round.

There are several results that are possible from playing two cards as follows:

Pairs (In-depth Features):
- Contains 1 card from Hot Topic suit: (crossover success) 4x XP for each card.
- Old News: (taken to libel court) Negative XP for each card, and miss the next round.
- Normal Stories (pair of off-suit cards): Double XP for each card, plus a change of hot topic.  The player chooses which card to place on top of the hot topic pile face up, and that suit immediately becomes the new hot topic.

After all the cards are scored and recorded for the round, the players place all their remaining cards in the discard pile and start a new round.  Play continues for 10 rounds.
Posted by crashdavis9 at 10:43 PM