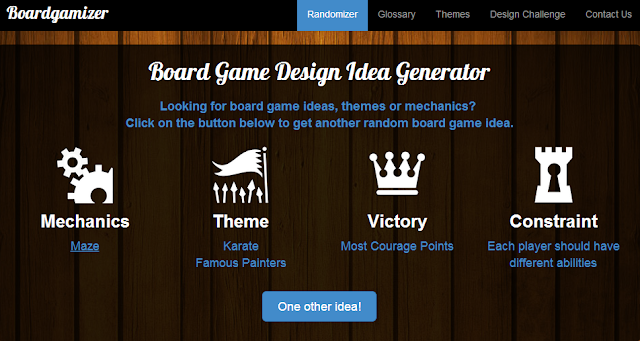 Today's challenge looks pretty rough.  I almost re-rolled it given the themes that it gave me, but I'm going to try and make it work anyway.


Yesterday's project game really coalesced in my mind quickly, so I was able to really just write the nuts and bolts of the game out immediately.  This one is far more opaque to me, so part of this post will be just describing my thought process and how I might start to create a game from this mess.

Leaving aside the issues with theme for a moment, I've got a little quandary with my mechanics and my victory conditions.  My first impression is that there's not going to be a great way to award courage points in a game based in a maze.  So I did a bit of trawling on BGG looking for a game that used Courage Points in a novel way.  My finding: Viva Pamplona!  It's an older game (1992) by five-time Spiel des Jahres winner Wolfgang Kramer.  Maybe not one of his best efforts of all time, given that he's also created gems like Tikal, El Grande, and Princes of Florence.

But I like the mechanic he's using.  Basically, instead of earning Courage Points, you start with a pool of them and you lose points by taking certain actions.  Hide from the Running Bulls in a safe spot?  Lose a point!  This is something I can work with in today's game.

As an aside, this is also one of the reasons why I'm excited to do this project.  Boardgamizer has a lot of mechanics and victory conditions that I haven't played with before.  Forcing myself to learn about them and broaden my game understanding horizon is a good thing for my future development as a game designer.

Speaking of which, I'm not sure I've ever played an actual board game with a maze mechanic.  BGG has lots of games listed with this mechanic type, but I've never played any of them.  I think I'm going to trailblaze a little here in this area.  I'll wing it on this one.

Ok, so the last bit is the theme.  Ouch, this is a rough one.  Though it does occur to me that Teenage Mutant Ninja Turtles probably fulfill this theme by themselves with their names and expertise.  But I don't think I'll take that easy way out.

I'm going to broaden the scope of "Karate" to just be "Martial Arts."  That might be cheating a bit, but I find Karate a bit too narrow for my taste on this one.  Famous Painters I'll adhere to without any caveats.

Without further commentary, allow me to present:


It is the year 2085.  Worldwide, society has largely collapsed after massive famines and energy shortages.  Governments, economies and societies all over the world have fallen and been remade.  Some technology and knowledge from our golden age around 2020 still remain, but much of the world is reverting to more simple ideas about how society should be formed.

In Japan, a new Shogunate has emerged.  Amazingly, the line of Japanese succession is still unbroken, and the Emperor still rules the country in name, but a new breed of Shoguns hold the de facto power in the country.

Shogun Arakida is a man of tremendous power and greed.  He has access to the resources of a once-great technological country and is happy to use them to solidify his power.  He styles himself as the return to a better time in Japan's history, and has reinstalled Samurai culture throughout the country.  His palace in Edo is staffed by over 500 modern swordmasters and he uses their power to control the country.

Recently, he has become obsessed with bringing back the best of Japanese culture and art, and creating a new era of wonder in Japan.  Coincidentally, one of his lead researchers into useful golden age technology found a rudimentary time machine that Arakida has started to experiment with.

His first attempts at using the machine were glorified kidnappings.  He sent agents back in time to capture five great painters from Japan's history.  His knowledge of Japanese painting is far from comprehensive, but he selected the five men based on a few pieces that he owns in his palace.

They were:
Sesshū Tōyō, landscape painter and monk from the Muromachi Period
Kanō Motonobu, founder of the Kano school during the Edo period, and painter of 36 Immortals of Poetry
Tomioka Tessai, multi-talented, prolific painter of great color and passion in the 19th century
Utagawa Hiroshige, the great master of wood block printing

The proud and noble painters were distraught at having been seized from their own times and brought to paint at this new Shogun's pleasure.  Gradually they have all been thrown into the dungeon of the Shogun's castle, only brought to the surface often enough to be forced to paint for the Shogun.

Now the adventure begins.  A sleeping guard has allowed Tessai to steal his keys and open the cells of the artists.  This may be their only chance to escape their bonds, but they make a pact that this must end with them.  Even using the time machine to return to their own times is too fraught with danger and irresponsibility.  They must destroy both it and the plans for making another one, so that no more artists will be enslaved in the future.

Across the hall from their cells is a storage closet for the materials they use to paint.  In the future these materials have nearly magical powers, and in the hands of masters like themselves, it is possible to create art that is nearly indistinguishable from reality.

The four artists start in the Shogun's dungeon.  Armed only with their wits, courage, and their magical artistry, they must find their way to the time machine and destroy it.  Only the artist who has retained the most courage will have the bravery to destroy the machine and trap themselves in this hellish time.  Each artist starts with 30 courage points.  The artist with the highest CP total will destroy the machine, but it will take a minimum of 1 CP to do so.  If all artists are captured or fall below 1 CP, the game is lost.

There are a few elements to the game.  It is a randomized dungeon, using a tile-laying mechanic on each player's turn.  Some tiles have samurai guards who are patrolling the dungeon.  They move in regular patterns, moving every turn and taking every left turn they come to. If an artist is ever in the same space as a guard, he is captured (unless he can use an art power to evade the guard).  If a guard can ever see an artist straight down a hallway, he will move one space per turn toward the artist (or the last place he saw the artist) until he captures the artist.

There are also tiles with safe zones.  These areas are places where the artists can hide away from the guards.  Staying in a safe zone drains the artist of one courage point.

Each artist has an art power he can use while they explore the castle.  Toyo, the landscape painter, can create new safe areas at any time.  Monotobu can create life-like portraits that act as decoys to draw the guards away (they will go directly to the portrait and be frozen there for one round until they destroy it).  Tessai can create
blinding displays of color.  Any guard who sees one of these color displays down a hallway is frozen for two rounds.  Finally, Hiroshige can create lifelike scenes that can mask a hallway's contents to any guard.  Guards will not proceed down hallways that are masked, nor will they see artists on the other side of a masking.  All artist abilities cost 5 CP.