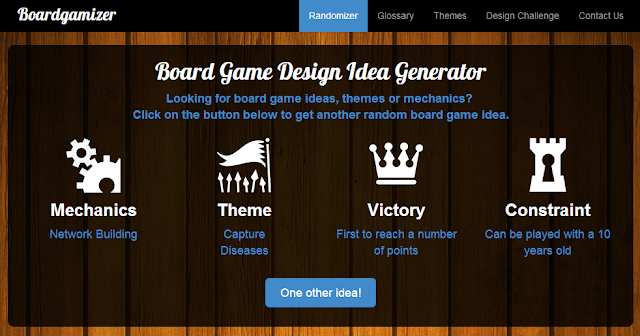 Mechanics: Network Building
Theme: Capture, Diseases
Victory: First to reach a number of points
Constraint: Can be played with a 10 year old (sic)

It's an interesting set of circumstances for a game, and at first I thought "Oh, this one looks easy."   But then a bit of conflict and maybe even some designer's block set in and for a long while I've been unable to come up with anything that really convinces me of its merit.

But now I've got about three hours left before the end of my day and I haven't put anything together.  I've gone out to the cafe for the evening until I can bang out an idea worthy of being put up on the blog.  Even knowing that not every design will be good (or even decent), the thought that some people will read these at some point probably even more that one or two of the ideas this week have actually felt pretty good means that I'm setting a higher bar for myself.

It occurs to me that it might even be a good idea to just go ahead and write whatever the first terrible idea that comes to my head.  Just make today's game wretched so that I can dispose of the daily pressure of trying to make a good game.  It is tempting, but I can't quite let myself go there.  (not that what will come out will be good, but I've got to give it my best shot or I won't be happy with myself).

I think the main issue I'm having is reconciling network building for 10 year olds and disease capture.  Pretty much the who;e game, eh?  Well, I guess I don't have problems with a first to a number of points game.  Probably works best with network builders and capture anyway.

One of the issues I'm having is that some of the network building kind of ideas have to do with using the CDC and a travel network, kind of like Pandemic, but needing to build the network up as you go. Maybe a direct-response network to quickly quarantine disease outbreaks in the future or something.  Could work, but I can't imagine 10-year olds caring or quite grasping the theme, and that's problematic.

Setting and theme:
This game is set in an elementary school.  A massive outbreak of red head (a terrible variant of pink eye) has broken out.  You are each class officers, and have been given a special task.  The nurse is trusting you to gather up the students in each classroon who have red head and send them to her.  You need to act quickly, because Red Head spreads super fast.  If any class becomes totally infected, you lose the game.  So you want to work together to make sure that the whole class isn't infected, but you also want to impress the nurse with how good you at at your job.

Parts:
- 6 Classroom boards (Grades K-5).  Boards are square grids, approximately 10 by 10 grids.  Each has a different desk configuration, but all have 30 desks.  Boards are laminated.

- 60 student counters.  30 are "healthy" students, and 30 are "Red Heads."  Student counters are all the same circular shape, with only the color of the center of he counter being different.

Every classroom has 30 students.   Players will start by clearing out the kindergarten and them work their way up to 5th grade.

One student per player is already infected, but their placement is random.  For each player in the game, take out one healthy student, place in a replacement sick student, and shuffle the deck of student counters.  Then place them sequentially in the classroom at desks 1-30.

Each round, the youngest player goes first.  They spin the direction spinner.  Any student who is sitting next to a sick student in the specified direction becomes sick.  Replace their token with a sick student token.

Every time it is the first player's turn again, they must spin for new sick students.

After spinning and placing new sick students, each player gets a turn to try and separate the sick students.  Using their marker, and starting at the door to the hallway, each student can draw five spaces along the grid lines.  In the first round, they start at an intersection of the door and go in a direction of their choice.  In later rounds, they must continue from the end of their line on the last round.  Players lines can cross, but no two Players can draw over the same line segment (doors are two spaces wide, and Players can start out going along the outside walls).  Players can retrace line segments they have previously drawn, if they want to.

Their goal is to encircle/box in as many sick students as they can.  Once each sick student in the class is encircled by at least one player, the team counts their score and moves to the next classroom (if no one won the game on points).

So the sequence of play is: